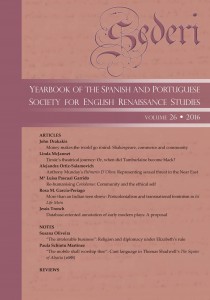 The dramatic increase in criminality in sixteenth-century England was behind the emergence of a new type of literary work known as “rogue literature,” which dealt with the life and activities of beggars and lawbreakers. These rogues’ language, cant, became a major concern for many authors, who attached glossaries to their works for the benefit of those who were not familiar with it, marking the beginning of canting lexicography. It is within this framework that Thomas Shadwell (1640–1692) wrote his famous The Squire of Alsatia (1688), which is the focus of this study. This paper explores the use of cant language in this celebrated play from a linguistic and lexicographic point of view, arguing that its profuse employment of canting terminology, much of which is first documented in the play, made a significant contribution to studies in canting lexicography and proved its reliability as a historical portrait of seventeenth-century English cant.

But, Roxanne. 2011a. “‘A Kind of Gibberish Used by Thieves and Gypsies’: The Social Significance of ‘Cant’ in the Eighteenth Century.” Presentation at the Crime and the City Symposium of the Moot Court, School of Law, University of Sheffield, 4 February 2011.

But, Roxanne. 2011b. “Unconventional Language Use in the Past: The Pragmatics of Slang in an Eighteenth-Century Context.” Presentation at the School of English’s Postgraduate Colloquium, University of Sheffield, 23 May 2011.